We are specialist in Stansted airport transfers .

London Stansted Airport is an international airport located at Stansted Mountfitchet in the local government district of Uttlesford in Essex, 30 mile northeast of Central London and 0.93 mile from the Hertfordshire border.

Stansted is a base for a number of major European low-cost carriers, being the largest base for low-cost airline Ryanair with over 100 destinations served by the airline. In 2014 it was the fourth busiest airport in the United Kingdom after Heathrow, Gatwick and Manchester. Stansted’s runway is also used by private companies such as the Harrods Aviation terminal which is opposite the main terminal building and handles private jets and some state visits.

The airport is owned and operated by the Manchester Airports Group (MAG), which also owns and operates three other UK airports. MAG agreed to buy the airport from Heathrow Airport Holdings, formerly BAA, on 18 January 2013,[3] and the sale was completed for £1.5 billion on 28 February 2013.[4] BAA had been required to sell the airport following a ruling originally made by the Competition Commission in March 2009. 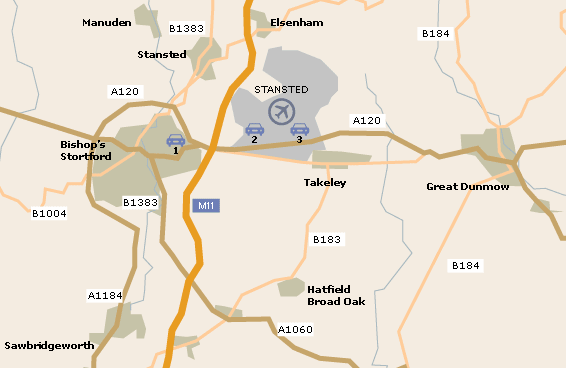 We have the latest technology fitted in our cars and all our vehicles are regularly checked to ensure they are dirt free and presentable. Our smartly dressed drivers are polite and make sure that all of your requirements are met on the ride.

For more information on flights at Stansted Airport visit:
www.stanstedairport.com and leave the travel between airports to Dial a Car.